My Experience with Remote Learning in 2020

Posted by JD on June 03, 2020
My summers away from school tend to have two phases:

Of course, "school" had ended on March 13 when classes broke for Spring Break. Informed teachers knew that we wouldn't be back immediately after the break. I, personally, didn't expect that I wouldn't see two classes of German 2 and one class of English 11 students in Room 953 again. I left, hoping that a 3 or 4-week break would let the virus pass over my country and my community.

We "returned" from spring break on March 23, emailing students and parents, trying to cobble together lessons and events that would help us to maintain contact with students. An email, participation in an online chat, or completing an assignment posted in Google Classroom.

The next week, once it was clear that classes would be cancelled through the end of April and the likelihood of a complete cancellation seemed all but imminent, our district released the following guidelines.


When I first heard of plans like this, I imagined that it would create what I called "a world without C students."

What I meant was that a number of students wouldn't be back to the class in any form: the students who would rather have an extra 30 minutes of lunch than return to class, the students whose attention was marginal during the 90-minute daily block, and absent on the 1-2 days a week when homework was assigned. In two words: the C students.

D and F students might see the new policies as a chance to earn a passing grade. A students, in most cases, would be A students no matter what. And many B students might take the opportunity to go for an A.

This was all speculation at the time.

As we went into remote learning, I kept my classes on Google Classroom, which I had been using for all of my teaching since 2016. Students already knew their logins, and they were experienced taking quizzes and turning in assignments online.

In my German 2 classes, rather than sticking with the classroom textbook I had been using--which I feared wouldn't translate well to online learning without the direct instruction to go along with it--I decided to use Deutsche Welle's fantastic online course, Nico's Weg. I planned five activities per week: two online Zoom sessions to introduce the Nico's Weg lesson, two online lessons based on an assigned chapter from Nico's Weg, and a fifth cultural activity: a movie, history lecture, or experience with German media.

In English 11, I taught two of the three units I had planned to teach in the semester. A persuasive unit on video games, and a book unit on Into the Wild, which I had sent home with students before spring break.

After moving meetings around the dial, I ended up meeting at 3 p.m. on Zoom. Mondays and Wednesdays were for my combined German 2 classes. Tuesdays and Thursdays were for English. On Fridays I had a lecture or a video for German students.

It all added up to about four or five interactions per week: assignments students could do online, Zoom sessions they could attend. Videos they could watch and report on. After crediting most students the Bonus Point for checking in after spring break, I set the level at 2 assignments per week, which would earn the credit for that week.

Here were some interesting events from those weeks:

Now for the results. I will just post images of the spreadsheets below. 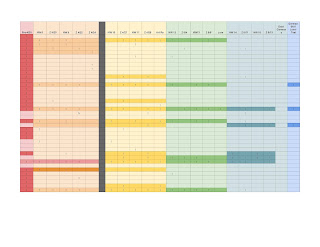 In my German class, you can see the number of assignments I gave each week. The darker colors show those students who received the extra credit points per the district policy.

The column on the far left shows the students who were in touch with me during the two weeks following spring break. I credited emails as well as completion of online assignments and participation in Zoom meetings. By the end of the quarter, I had about five regular students. You will also see five assignments per week that I led or assigned. 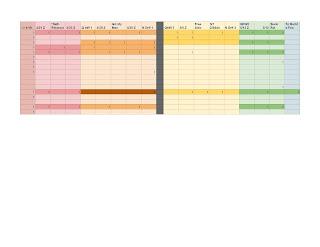 Here are my English classes. I had three or four students who were consistent throughout the time away. In English 11, too, I had two students who earned credit without taking part in any of the Zoom (marked "Z" at the top of each column) sessions. They simply kept up with the classwork.


Ultimately, there is no such thing as a "world without C students." They are with us, and great schools will help those very kids get into college and/or great careers. These are the kids who need public schools. These are the kids teachers are called to serve to the fullest--and that takes more than scheduling Zoom meetings, posting Google Classroom assignments, and then waiting to see who will show up. It won't be the C students.

We will never again be in a "world without Covid-19." Never again. And pandemics will not come in 100-year intervals in the future. The conclusion of the 2019-20 school year was not a great time of learning for students. It was an essential time of learning for teachers, administrators, and school districts. I hope that our lessons stick.
ELA german voice