Reviewing my Year in Teaching: 2017

Posted by JD on January 01, 2018
It is New Year's Day (happy new year) and Christmas Break is almost over.

I have been thinking about this blog for weeks, though, ever since the last boxes on my class calendars were filled in, and students began working on their final projects, and my role in my classroom turned from planning and teaching to coaching and assessing (and catching up on grading).

For weeks it has been in the "should be written" folder in my brain--a folder that, judging from the lack of LOL posts in 2017, is nigh to bursting.

So it's 2018 now (happy new year) and I'm resolved to empty the thoughts teeming in my brain and get them out where I can examine and share them. On the written page of LOL.

I began 2017 thinking that I was ready for a break from four very hectic years (2013-16) in which I had worked with a proud array of state (TNCore) and national (Teachers for Global Classrooms, America Achieves) fellowships. Common Core (or whatever it was called now) was established in Tennessee. If I had expected that these experiences would lead to greater things professionally, an emphatic shoulder shrug by my district and school administration was a clear negative.

(And I am committed to doing my best for my school district, if for no better reason because my own kids are students here, and will be until they graduate in 2019 and 2021).

The last year in the paragraph above, 2021, proved significant for me. It is (now) three years away, and it is the date the my youngest son will graduate from high school. Teaching, for me, has always been more about parenting than about a profession. I care about being a good dad, and I appreciate teaching for the opportunities it offers me as a father.

If I had written this blog post before the January 1, 2018 (happy new year), I probably would have counted down the top teaching moments I experienced. Instead, I'll count things up!

I began 2017 without a national fellowship or a statewide focus, but I had a deadline. I wanted to complete a formal proposal for district administrators by the Martin Luther King, Jr., holiday. The next day, I delivered a 20-page proposal to my (supportive) principal and (skeptical) district administrator. Three and a half months later, after pulling every string I could think of, I was granted approval.

I now have 15 students planning to travel to Germany with me in June, and an additional two families here planning to host IGS students in April. The exchange has been rewarding at every level: my friendship with the lead English teacher at IGS led to some great German-language book recommendations, immediate answers to questions about German that came up in my teaching, and a big leap forward in my own German skills.

This year my German 1 class's penpal project partnered with an English class at IGS. Students exchanged e-mails, chats, even postcards, describing life here (the postcards had to be written in German on the students' plans for Thanksgiving) and learning about life in Ingelheim. For their final exam, my students provided German-language presentations on their friends' hobbies, families, and community.

This was my 4th year of doing the penpal project, but my most successful ever, now that it is focused on one classroom and not left up to students to find partners for themselves on Students Of The World. I plan to continue the exchange next semester in German 2. I'm especially excited about this program because it grooms students at both schools (freshmen there, sophomores in my class) to eventually take part in future GAPP exchanges.

Speaking wasn't something I planned to do this year, but I had three opportunities to share what I had learned, and I loved it.

The hardest presentation was a ten-minute talk I prepared, "Wie eine GAPP-Gemeinschaft zu Entwickeln" for Goethe Institute's GETVICO German-teachers' conference last September. The coordinator of GAPP programs nationwide had encouraged me to submit a proposal, and I did. As the deadline approached, and I realized that I would be expected to speak only German to an audience of German-speaking teachers, I blanched with horror. I simply wasn't ready.

As things worked out, I had already agreed to help a student teacher at my GAPP partner school in Ingelheim prepare for some English lessons. She was teaching To Kill A Mockingbird, and I listened to her plans, helping her to develop key terms, and even going over the lessons with her live via Facebook Messenger. As my GETVICO presentation neared, she generously corrected the script I had written, helped me with my slides, and helped me to pull it off.

GETVICO was the toughest, scariest thing I did all year. Afterwards, I signed up for Goethe Institute's online course, German for German teachers, where I built my skills. The thought of ever doing something like that again terrifies me...and intrigues me.

In November, I got a chance to share my GAPP experience with a different audience at the Teachers for Global Classrooms Alumni Conference in Washington, DC. TGC, the fellowship that took me to the Republic of Georgia in 2015, remains the single-coolest experience of my teaching career, and I was eager to reconnect with globally minded teachers. My presentation there, "Finding the Balance for Teacher Leadership" described how I used both my district's bureaucracy and political connections to ensure that GAPP was approved.

GAPP will lead to another out-of-state conference in less than two weeks, a meeting for new GAPP program leaders in New York City. I won't be presenting there, but I feel like the great start I've gotten on my program will be worth sharing with the other teachers there.

Finally, last summer my district had a Google Summit, encouraging teachers to use Google Tools in their classrooms. Last spring I had recertified as a Google Educator, so I was able to provide training on Google Docs and on Forms.

3. Developing NaNoWriMo Winners
The most astonishing achievement of 2017 had to be my student writers who took part in National Novel Writing Month, a.k.a. NaNoWriMo. I began incorporating NaNoWriMo into my Creative Writing class four years ago, using materials from the organization's Young Writers' Project.

NaNoWriMo challenges writers of all ages to write nonstop every November. Adults can "win" by reaching the goal of 50,000 words. Young writers have more leeway in their goals. Some of my kids have written 50-60,000 words. I usually cut it off at a minimum of 25,000 words, giving certificates of achievement to students who write more than 10,000 words. 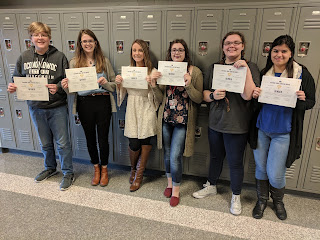 This year, I had six winners of NaNoWriMo (pictured). Last year I had four winners. The year before I had two. On December 1 we celebrated with a Thank God It's Over party, providing class time for the winners to read from their works, eating, drinking, and making merry.

These writers made me a pretty incredible teacher this year. My hope, of course, is that my teaching had some impact on their incredible writing skills, too.

Wrapping Up
These are a few highlights of my year that make me proud.

A few activities that I'm proud of, but about which I didn't have time to blog include


In 2018 I resolve to blog more, Tweet more, and share more of what I have learned, both online and, perhaps, in conferences. Thanks for reading.
ccss ELA german global ed teaching voice