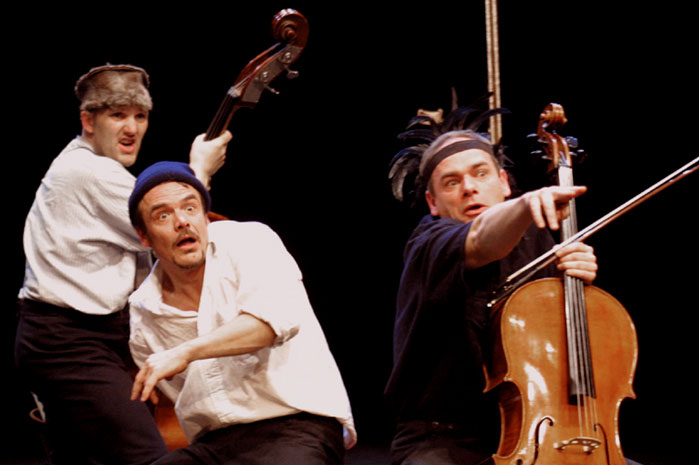 Moby Dick is both the greatest and the most misunderstood work of American culture. It is a Shakespearian drama, a fish tale, and a major work of philosophy. In other words, Moby Dick is and was everything but a novel!

History shows that the book was a dud, a career-ender for Melville, who spent the rest of his life in obscurity. It wasn't until film and the stage brought the book to life (and after America had recovered from its antebellum obsessions with gold, slavery and Great Awakenings).

My teaching of Moby Dick was enhanced this year by the fact that Theater Triebwerk, a company based in Hamburg, Germany, would visit Nashville on their American tour.

Yesterday my students and I attended the production, which condenses the book in a number of creative ways.

The story of Ishmael is told in a tight, 70-minute running time, which still managed to hit the highlights of the tale while deepening students' understanding of the story with encounters with the prophet, Elias, and a very creative dramatization of "The Grand Armada," brought to life by actor Roland Peek's amazed descriptions of birthing whales and umbilical cords, followed by his outrage that Stubb asks Queequeg to spear a whale calf.

The production is minimalistic, too, with just three actors on stage, a chest full of props and three mast-style poles. Peek (above center) plays Ishmael and Captain Ahab, using a knit cap and a top hat to alternate between them. Uwe Schade (right) plays Starbuck and Queequeg, alternating hats while providing music on his cello. Heino Sellhorn (left) plays an array of characters, including Stubb, Peleg, Elias the prophet, and the captain of the Rachael, as well as the bass which underlines the soundtrack and serves as a convinging tiller for scenes on the lifeboats.

There is music throughout, anchored by the stringed instruments. There is a whaling chanty, and the dark chant, "Going on this trip makes me sick, Moby Dick," as Captain Ahab hunts the whale in the final scene.

Our final glimpse of Ahab is clever. Peek's eyes glazed over, his body shifted as if eternally attached to the whale.

After the performance, Schade and Sellhorn were kind enough to let me interview them.

I asked them about the language of Melville, which my American students find challenging. I wondered what it must have been like to read it as a second language. They told me that they had actually written the English script of the play based on a German translation of Moby Dick, not the original. (They perform the play for students all around Germany as well as here in the United States.) This let students see and hear the essense of the work instead of getting bogged down in the language, as we tend to do, even with my best efforts as a teacher.

I asked them about what they had learned about American culture through their performance of the play. Sellhorn told me about a writer they had met in New Bedford who had elaborated upon the African American experience and the way that Melville described it in the book. (The book's African characters, Pip and Daggoo, are not in the Triebwerk production.) Coupled with this knowledge, they had been moved by a visit to the National Civil Rights Museum in Memphis last week.

But Ahab is so quintessentially American, I countered, mentioning Gold Fever, radicals willing to tear the United States apart over the issue of slavery, and other mid-19th-century madness. What can a German draw upon to bring him to life? (Peek wasn't present for my interview, and I would have loved his take.)

Uwe Schade smiled at this suggestion. "We in Germany have a complicated history, too."

I think that's the lesson from Triebwerk's production of Moby Dick: three German actors have a lot to teach American students about some of America's grandest themes, through their interpretation of American literature's finest work.
ELA teaching