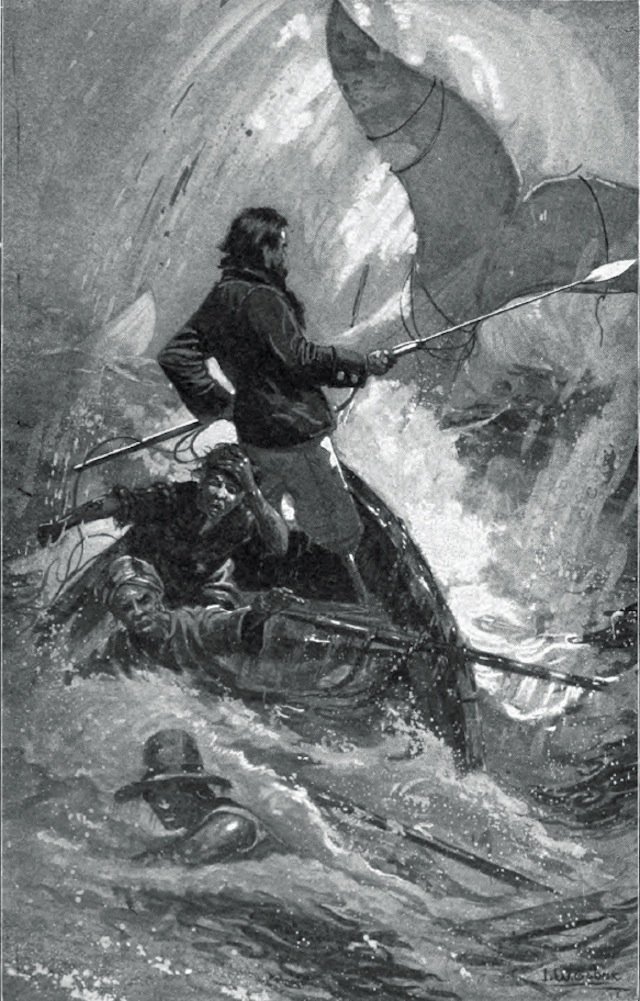 I'm reposting this from my personal blog. It's a post I wrote about teaching Moby Dick back in 2009. That should give you an idea of how long I've been trying to perfect this unit--JD
Eighteen months ago my principal and English department head conspired to do something that would shake my teaching to the core: for the first time in 12 years of teaching, they assigned me to teach 11th-grade American Literature.

It seems strange that it took me 12 years to get to this point. I had always considered myself a "Brit Lit" kind of guy, having studied for a year in England, and I enjoyed the basic essay-writing skills taught in 9th and 10th grade. I really didn't care to teach American Lit—until I had to care.

What was I to do? I took on the task with gusto. Soon my love for American history and my passion for my country was pouring out. I was reading great American books for the first time like The Great Gatsby, Walden, and Moby Dick (What took me so long? The education I received in American literature had been far inferior to that I received in the Brits. Enough said.) I even made Moby Dick the theme of a Summer Road Trip in 2008 to Plymouth and New Bedford, Massachusetts.

This week has been "Whaling Week" in my English 11 standard class. Today we capped off the week with the conclusion to Moby Dick, an 8-page excerpt of the chapter, "The Chase—Third Day" in our textbook. Melville has always been tough—and unpopular. Why else would an English major like me have avoided it for 20 years? But Moby Dick is worth the effort. In plot, characterization and philosophy, it is unequaled in American literature. I think it's a lot like The Odyssey or The Bible: its meaning and impact get greater every new time you read it. I remember getting to page 450 in my first read and realizing, "I'm going to have to read it again to really, really get it." And you know what? I wanted to do it.

That's not to say that standard-level English students will feel the same way. That's why I break the Moby Dick lesson down to two days—and I precede it with a day reading non-fiction excerpts from In the Heart of the Sea: the Tragedy of the Whaleship Essex, the real-life whaling story upon which Melville based his novel, and watching a video. I have a scale model of a harpoon in the class. This year I even had these landlubber students of mine practice knot-tying. By the time we started they were ready.

I read the first excerpt, from The Quarterdeck, out loud, pausing to help students wade through the language. I give voices to all the characters—Ahab always has a really raspy, "pirate" voice—and I try to do a little acting and add some sound effects. By the end of this reading, the kids have a vivid view of Ahab: god-drunk with hubris, exhorting the men, "Death to Moby Dick! God hunt us all if we do not hunt Moby Dick to his death!" Truly, the only other character I can compare to Melville's Captain Ahab is Shakespeare's Richard III.

And the comparison doesn't end there.

On the 2nd day of the reading, I have arranged a choral reading. I have highlighted the parts of Ahab, Stubb and Starbuck. Students read these from the front as I read the non-dialogue parts. This year I added sound effects. A student at my computer played sea waves, bird calls, hammer sounds—even the theme to Jaws during the bits where the whale is bearing down on boats orThe Pequod.

Did it work? I think it did. It was clear to the kids what had happened to Ahab—and to the whale. More importantly, I had many more kids taking part in the reading. I felt that it held their attention.

But as I read it aloud, one name kept coming back to me: William Shakespeare.

When I hear Moby Dick read out loud, I hear Shakespeare. I mean it. I'm here to say that Herman Melville is the closest American writer to Shakespeare's characterization and his cadences.

Consider two of the sections I read today. First, Starbuck's growing awareness that death lurks as he sees Ahab row away from the ship a final time:

Heart of wrought steel! Canst thou yet ring boldly to that sight?—lowering thy keel among ravening sharks, and followed by them, open-mouthed to the chase; and this the critical third day…? Oh! My God! What is this that shoots through me, and leaves me so deadly calm, yet expectant—fixed at the top of a shudder! Future things swim before me, as in empty outlines and skeletons; all the past is somehow grown dim. Mary, girl; thou fadest in pale glories behind me; boy! I seem to see but thy eyes grown wondrous blue. Strangest problems of life seem clearing; but clouds sweep between—Is my journey's end coming?

Aside from the brilliant image that is caught, "fixed at the top of a shudder," this is a heartbreaking line. If it were performed on a stage, even a middling actor could wring tears from an audience. It's almost better when it is spoken than read. Maybe that's whyMoby Dick was considered a failure after it was published. Maybe that's why no one "got"Moby Dick until America's primitive movie industry put it on a screen in 1926, over 30 years after America's Shakespeare had died in obscurity.

When you hear it, you know.

When you read Moby Dick, it is easy to get bogged down. Every chapter of plot is followed by highly symbolic, highly philosophical treatises on the whaleboat, the line, the whiteness of the whale, etc. This is the stuff that makes the novel great (John Steinbeck uses the same tactic to intertwine the story of the Joads and the Dust Bowl in The Grapes of Wrath). This is what makes the novel worth reading again and again—as we unwind the puzzle of antebellum America Melville has hidden for us.

But the sounds of Moby Dick bring it to life. I want to introduce one more speech—the last words of Captain Ahab. This time I'll break it down to pentameter to see how it works:

I turn my body from the sun. What ho, Tashtego!
Let me hear thy hammer. Oh! ye three
Unsurrendered spires of mine; thou uncracked
Keel; and only god-bullied hull; thou firm
Deck and haughty helm, and Polepointed prow—
Death-glorious ship! Must ye then perish,
And without me? Am I cut off from the last
Fond pride of meanest shipwrecked captains?
Oh, lonely death on lonely life!
Oh, now I feel my topmost greatness lies
In my topmost grief. Ho, ho! From all
Your furthest bounds, pour ye now in,
Ye bold billows of my whole foregone life,
And top this one piled comber of my death!
Towards thee I roll, thou all-destroying but
unconquering whale; to the last I grapple
with thee; from hell's heart I stab at thee;
for hate's sake I spit my last breath at thee.
Sink all coffins and all hearses to open common pool!
And since neither can be mine, let me then tow to pieces,
While still chasing thee, though tied to thee,
Thou damned whale! Thus, I give up the spear!

Why didn't I teach American literature until I had been at this twelve years? Maybe I wasn't ready yet.


Why did I teach Shakespeare dozens of times before I taught Melville. I think it's because you have to know one to love the other.
ELA teaching