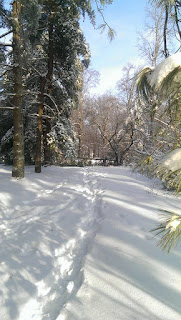 It's not news. Snow days. My district will be out of school again tomorrow--our fourth lost day in a row after a small snowstorm last Wednesday and a megastorm--THE megastorm of the winter (so far)--early Friday morning.

My home got more than eight inches of snow, double what counts for "good" snowfall during most winters. The Northeast (where my daughter is in college at Temple University) got three to four times as much snow and all the attention.

The picture above is my driveway Saturday morning. Along with all the snow, you will see a tree that had fallen across the drive.

Knowing that school is out again tomorrow, it's time to look at what the snow-week has cost me. Remember, last week, there was no school on Monday because of the Martin Luther King, Jr., Holiday. We had one day of school.

For one, I will throw out one sub-unit entirely--a reading of a congressional testimony about the influence of Native Americans on the U.S. Constitution. It's a fun series of reads. Gone. I'll try to wrap up the readings I began last week on Native American origin myths.

I wonder about the timing of this extended absence on my class, too. I had taught this new group of students 9 consecutive schooldays since the beginning of the semester (I don't count the one additional day last Tuesday after a holiday break and before a four-day snow break).

By this time in the semester, I would have a couple of solid weeks under my belt. Procedures in place. A comfort with the pace of the class and daily activities like grammar & vocabulary established for the schedule. Whenever we do get back, I'll be doing a lot more than just picking up with last week's lessons. In some ways I'll be starting the class all over.
teaching